THE VIOLATE CLUB AND THE SCOTTISH GOVERNMENT

The last post has raised a great deal of interest and understandably so.

Here are further details of the status of some members of this exclusive and illustrious club, that also provides life-size dolls of children for the “entertainment” of these people.

It makes you sick, doesn`t it?

The Scottish government does not seem shocked by this and even appeared to have been fairly relaxed a few years ago about the existence of this club, as you can see:-http://www.scotland.gov.uk/Publications/2006/04/24111914/38/

Is it any wonder that Tim Rustige and I have been dragged before Scottish courts and imprisoned for trying to expose this endemic national corruption over child sex abuse?

Does it surprise anyone that in contrast, these three highly influential sex offenders have walked free?

Liam Gibson, of Gibson Marine, convicted but not imprisoned for possessing over 50,000 child pornographic images, just around the time I was jailed for trying to expose perverts like him.

Douglas Haggarty, technical head of the Scottish Legal Aid Board, who was found committing a sexual act with a boy in the toilets of a large Glasgow store. Of course, not only was Haggarty not sent to prison, but kept his highly -paid public post of trust and responsibility!

Stuart MacFarlane, a former  deputy of Elish Angiolini, who was arrested when having sex with a female prostitute in a public place, put the two arresting police officers in hospital when he attacked them and was subsequently discovered to possess some 15,000 child pornographic images.

In a disgusting culture like this, is it also a puzzle to anyone why First Minister Alex Salmond has twice breached the law in defying the Information Commissioner over questions about his conduct in Hollie`s case?

I am not proud to say that serious problems of high level corruption also occur in Wales, with leader Carwyn Jones implicated in the shocking and moving Linda Lewis case. Terrible things have happened to this poor girl, but at least her champion, Kevin Edwards, finally obtained the courageous support necessary to blow the case open, from Assembly Member, David Rees, who deserves the support of every decent- minded person.http://cllrkevinedwards.blogspot.co.uk/2014/02/over-to-you-carwyn-jones.html

So far, in Scotland, every elected politician and almost every editor, with a few honourable exceptions, is too frightened of retribution from Alex Salmond`s solicitor, Peter Watson, of Levy & McRae, to dare to speak about or publish the facts about Hollie Greig`s case nor even tell the Scottish people about their leader`s legal

Ten months have passed and Scotland`s Chief Constable still appears to be grappling with the complex question of whether or not those accused of rape should even be questioned by the Scottish police. The Chief Constable`s position is not helped, of course, by his political boss, Alex Salmond`s breaking of the law in defying the Information Commissioner in his quest to establish the facts about Salmond`s involvement in the Hollie Greig abuse case.

It may well be  that Scotland`s lamentable record of having the lowest conviction rate for rape in Europe results from the attitudes of the country`s leading figures. A symptom of their utter contempt for the plight of rape victims may lie in the existence of organisations such as the Violate Club, which is present in Glasgow, Edinburgh and Aberdeen.

The membership of this club is heavily represented by members of the judiciary, senior police officers, lawyers, politicians and court officials. Its activities are every bit as repulsive as its name suggests. Amongst other things, members are treated to displays of simulated rape and sexual acts between humans and animals.

The identities of some of its members, I understand, would be of considerable interest to those who have been following Hollie`s case and indeed to the people of Scotland in general. Some have even been unwise enough to pay for the club`s facilities by credit card.

#Viviennewestwood !! templar and Saturnalia #worship all for 100 quid !! ?

Looks like what they gave Rosemary to wear in Rosemary’s Baby. 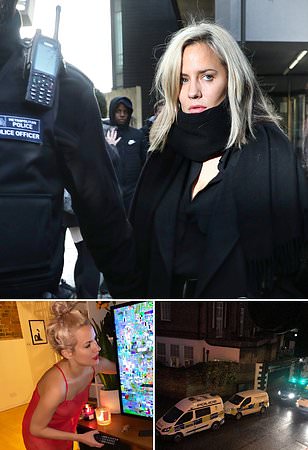 The former Love Island host (top and bottom left) was found dead in her flat in Stoke Newington (bottom right, police at her home) on Saturday afternoon, the day after she had been told that the CPS was pursuing a court case against her. Scotland Yard’s directorate of professional standards reviewed all previous contact with Love Island presenter Flack, 40, before making the referral on Wednesday. An IOPC spokesman: said: ‘The Independent Office for Police Conduct has received a referral from the Metropolitan Police relating to its contact with Caroline Flack prior to her death. We will make a decision on the level of our involvement after carefully assessing the information we have received. Receipt of a referral does not mean an investigation will necessarily follow.’

(TMU) — The infamous UK Police department Scotland Yard is refusing to reveal Prince Andrew’s location on the night that he is accused of being with Virginia Giuffre, one of the young girls trafficked by Jeffrey Epstein who was underage at the time she claims the Duke had sex with her.

Members of the royal family are regularly accompanied by police guards in their day to day activities and there are records of where and when the officers were sent—or at the very least a record of which officers worked on which day. If these records were to be made available investigators could easily determine where Prince Andrew was on the night in question, but police are saying that handing over such information could pose a threat to national security.

During his disastrous BBC interview, Andrew claimed that he was at a Pizza Express in Woking on the night then 17-year-old Giuffre (nee Roberts) says the pair visited a club and later had sex. If the Duke is indeed telling the truth, then his claims could be very easily corroborated by whichever guard was on duty at the time. Unfortunately, Scotland Yard has not been willing to cooperate.

In a statement responding to the inquiry, Scotland Yard said that revealing information about the disgraced prince’s whereabouts on the night in question could “undermine the safeguarding of national security,” according to the Sun.

“It would allow those with a criminal intent to gain an operational advantage over the MPS and place those who the MPS have confirmed are afforded protection, as well as protection officers, and members of the public at risk,” the statement continued.

Get the latest from The Mind Unleashed in your inbox. Sign up right here.

The investigation into Prince Andrew’s location on that night of the alleged crime is part of a case involving numerous Epstein victims who have been seeking justice for many years. As the Mind Unleashed reported last month, lawyers representing the victims have said they intend to subpoena Prince Andrew so he is forced to testify in court about his relationship with Epstein and his victims.

Evil mum ‘dressed daughter, 9, in Playboy outfit and watched as men raped her’ …I know a father who did this to his own sons. Can’t get lower than parents who drug & rape their own children. #samanthabaldwin

Evil mum ‘dressed daughter, 9, in Playboy outfit and watched as men raped her’
A NINE-year-old has accused her mother of dressing her in playboy outfits and then inviting scores of strange men to their family home to rape and abuse her, a court heard. The youngster from Austr…
thesun.co.uk