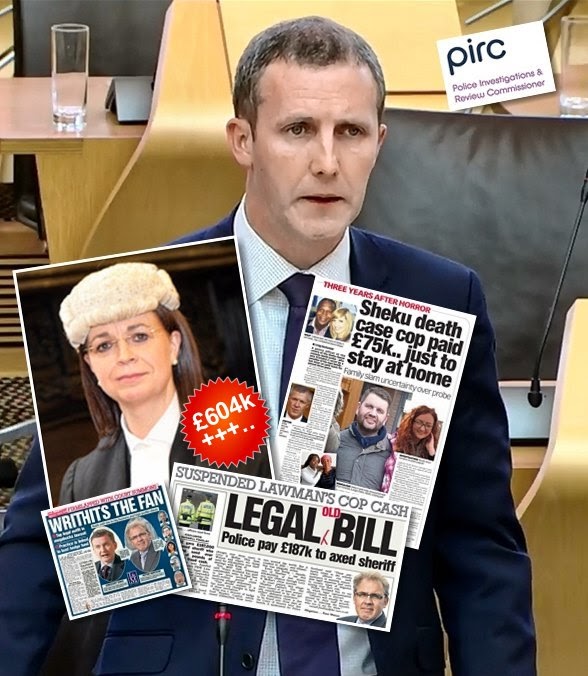 Ex Lord Advocate conflict of interest in inquiry role. A FORMERLord Advocate who has links to lawyers and a suspended judge who represent the Scottish Police Federation (SPF) and cops facing complaints – has been appointed to review how complaints are handled against cops.

However, details released of the review fail to mention that Dame Elish Angiolini (nee McPhilomy) – hired Levy and Mcrae – who have been paid hundreds of thousands of pounds by Police Scotland & the Scottish Police Authority (SPA) – to get cops off the hook from complaints – including probes into deaths.

One of the lawyers linked to ex Lord Advocate Elish Angiolini – is suspended Sheriff Peter Watson.

Watson, who was suspended from the judicial bench by  Lord Brian Gill in 2015, after being named in a £28m writ linked to bust hedge fund Heather Capital – represents Police officers facing complaints and investigations by the Police Investigations and Review Commissioner.

Links between Angiolini and Watson are revealed in documentsobtained from an investigation by Audit Scotland into payments of public cash by the Crown Office to Levy and McRae and Peter Watson.

Meanwhile Watson and his now former law firm Levy and Mcrae – also scoop up public cash for representing cops who are being investigated over complaints.

One of the high profile cases where Watson represents cops being investigated over complaints – includes  the three year investigation of Police Officers involved in the death of Sheku Bayoh.

Sheku, 31, died after being restrained by nine officers responding to reports of a man carrying the knife in the street in Kirkcaldy. Officers used CS spray, pepper spray and batons, after it was claimed Sheku struck Short. Dad-of-two Sheku lost consciousness and died in hospital shortly afterwards.

The Daily Record reported that Days after Sheku’s death in Police custody, the very same lawyer linked to Angiolini –  Peter Watson – who now has his own law firm PBW Law – issued a statement on behalf of the Scottish Police Federation and the officers involved.

He claimed Sheku “punched, kicked and stamped on” a female officer. However, none of this has been proved and a probe into the death is still underway.

The paper also reported Watson threatened the family of the deceased Mr Bayoh, in relation to a facebook posting, claiming the contents were a ‘breach of criminal law’.

A recent report in the Sunday Mail newspaper revealed PC Alan Paton, 44, has been paid about £75,000 to remain at home while the inquiry into the death of Mr Bayoh in Police custody, continues – three years after the events occurred.

A second officer involved in the investigation, PC Nicole Short, is also being paid similar amounts while off duty since Sheku’s death in 2015.

Catharine Jones, 42, of Oldham, was found guilty of unacceptable professional conduct and conduct that may bring the profession into disrepute by a panel of the Teaching Regulation Agency.

HAHAHA SO IT OK TO PUT UP RICKYS NAME? NO?

Wilfred Hyde Park 30/06/2018 at 11:51 pm
Is that the same Cat ‘Scot’ Selvester who’s repeatedly posted the names, addresses and telephone numbers of innocent people? No hypocrisy there, then.

Reply
Liza Radley 30/06/2018 at 11:52 pm
I wonder if Malcolm’s annoyed with David Scott too, as he introduced her as Cat Selvester at an FSF event recently (and had a bit of trouble pronouncing it, I seem to recall) 😂

The difference is cat dinnae hide like you nonces

IT HAS NEVER BEEN INVESTIGATED AS THE HAMSTEAD CHILD RAPISTS KNOW

I wonder if Malcolm would be good enough to show us his DBS certificate?

Happy tae its been put up several times…justsearch fir it

You are doxing cat ya fucking child raping nonce, put yout name up and we will check..

so  far Cat and Chris spivy havent heard a thing funny that .

Obsession hmm, its right to be concerned if children are being abused NO? … you seem tae be concerned wie appearances and spelling…deflection

We know you are child rapists ..

Well we will see them take it up ,if its not

BREAKING NEWS – My appeal to The MET POLICE on list of missing children from 1975 to 1990 have also been rejected on the ground of section 40 Freedom of Information Act, I’m now going to Information commission to get this overruled