THANKS TO ALL WHO SUPPORTED THIS CAUSE AND THE CAUSE OF ABUSED CHILDREN EVERYWHERE….WE NEVER GIVE UP ….EVER

Robert Green’s appeal against IPSO’s refusal of his complaint, December 2017

THE RICHIE ALLEN SHOW ON DAVIDICKE.COM: ROBERT GREEN – ‘WHY IS THE SUNDAY TIMES TRYING TO…

Look, here’s another imposter, pretending to be Nick, and, like Lav and McFuddy, wishing Esther would take her own life. You couldn’t make this stuff up! 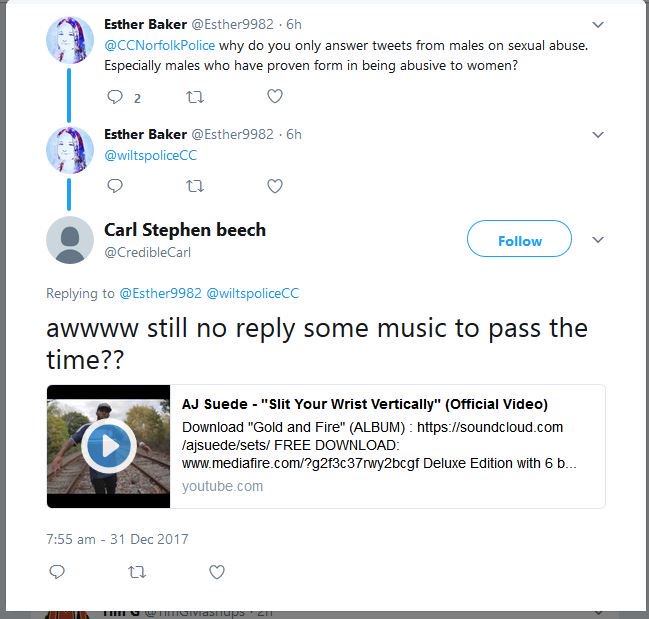 Man, 34, is arrested for giving unwanted massage to a boy, 13, as they waited at an airport luggage carousel before handing him money to say ‘thank you’

Re: The Hollie Greig Case

Thank you for sending me further papers following our recent meeting in Altrincham. They make disturbing reading.

I am copying this letter to David Mowat MP and Ruth Davidson MSP so that they will be aware of my interest in the case and will know that I am available to assist in any actions that they might take.

NOT PRO OR ANTI INDEPENDENCE ON THIS BLOG

:
NOT LEFT RIGHT OR LIBERAL NO COLOUR NO RACE NO RELIGION ONE GOAL NONCE WARS PICK A SIDE CAUSE WE ARE GOING TO GRIND YOU INTO THE DIRT

Disclaimer: the posting of stories, commentaries, reports, documents and links (embedded or otherwise) on this site does not in any way, shape or form, implied or otherwise, necessarily express or suggest endorsement or support of any of such posted material or parts therein

IF THEY HAD BEEN INTERVIEWED ABOUT HOLLIES ABUSE.

THEY ALL ANSWERED NO!.

when a case of rape is reported, you, as representative of the Crown Office, do not believe it is necessary for the police to question the alleged perpetrators without delay;

when a case of rape is reported, you, as representative of the Crown Office, do not believe it is necessary for the police immediately to search the homes of those named for corroborative evidence;

when a case of rape is reported, you, as representative of the Crown Office, do not believe it is necessary to seize and examine the computers of those named at the earliest opportunity;

when allegations of rape are supported by evidence from well-respected medical and psychological experts who unanimously confirm not only that systematic abuse has taken place, but go so far as to name two of the most likely perpetrators, you, as representative of the Crown Office, believe it right to dismiss their testimony and allow those named to leave the country;

when a school doctor twice reports an under-age girl to be at risk, and that girl’s headmaster – one of those subsequently named as a serial rapist – consistently fails to alert the child’s mother or to take any steps to protect her, you, as representative of the Crown Office, believe this to be the normal behaviour of a responsible, and guiltless, person;

when a case of rape is reported by a girl with speech difficulties, you, as representative of the Crown Office, do not believe it is necessary to supply her with support during police interviews, but are happy to use her handicap, in this respect, to discredit her spoken evidence;

when a case of repeated multiple gang rape over many years is reported by a young girl who also names seven fellow victims, you, as representative of the Crown Office, do not believe that, in view of the Scottish law regarding corroboration, it is absolutely essential that the police question those she has named immediately.

When an acknowledged victim of rape receives a substantial award from the Criminal Injuries Compensation Authority, you, as representative of the Crown Office, feel justified in continuing to maintain that the allegations on which this award was based were fully investigated and found to be false.

The document produced by the Police Complaints Commission for Scotland included the lines. “The position, as far as I can determine it, is that there seems a sufficiency of evidence to accept, on the balance of probability, that X was sexually abused, and that this has included penetration of her private parts.

Given that X, because of her disabilities, has been closely supervised throughout her life, the perpetrator is most likely to have been someone close to her who had regular, unsupervised access.”

Re: Alex Salmond’s non-compliance with the Information Commissioner until threatened with criminal proceedings: in Scotland’s only independent law magazine, The Firm, 11 July 2011, we read: ‘Last month the Scottish Ministers were compelled by the Information Commissioner to address a series of questions put to the First Minister in correspondence in relation to the (Hollie Greig) case in January this year, the first of which was: “When did you first become aware of the allegations made by Hollie Greig about her being abused by members of a high-ranking paedophile ring in Scotland?” The commissioner required the Scottish Ministers to respond by today’s date or risk being held in contempt of court.’

A letter to Robert Green from the Information Commissioner dated 10 April 2014 states: ‘I am writing in response to your letter of 6 April 2014 … in which you asked for the date on which the Commissioner issued the decision referenced in the Firm Magazine’s articles. The Commissioner’s decision was issued on 26 May 2011.’

It was not until they were under threat of criminal proceedings that the First Minister’s Office came up with an answer, saying it was impossible to give a date, since all the relevant records had been lost. However, the magazine goes on to say, ‘The Firm has seen correspondence from the Crown Office dated 23 July 2009 addressed to the Greig family’s lay representative Robert Green, which suggests that correspondence addressed to the First Minister outlining the allegations was received over two years ago.’

Re: the likely validity of Hollie Greig’s claims, The Firm writes, ‘Greig received a payout of £13,500 from the criminal injuries compensation authority, and was described by Detective Inspector Iain Allen of Grampian Police as “a truthful witness to the best of her ability and an entirely innocent victim.” ‘ Ample expert witness statements from respected police and medical professionals, including Hollie’s school doctor, back up her allegations.

Of 22 persons named by Hollie as abusers, only two (her father and her brother) have ever been even superficially questioned by the police. Even though her father and brother were described in a police report as having ‘a predilection for very young girls’, they were allowed to go abroad to Portugal, where they run a business connected called ‘Daisy Chain’ which involves frequent travel to and from South America.